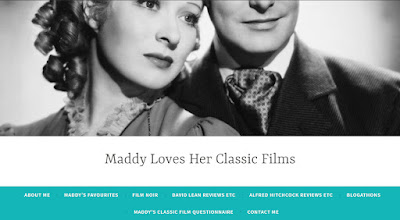 CMBA profiles one member every month. This month's interview is with Maddy who blogs at Maddy Loves Her Classic Films. Maddy loves all genres but her go-to favorites are film noir and romance.

What Sparked Your Interest in Classic Film?

A combination of things really. I grew up during the 1990’s and watched many of the Disney animated classics such as The Jungle Book, Aladdin, Bambi on video. Those Disney classics were my first foray into film. Classic musicals including Singin’ In The Rain, The King And I and South Pacific came next, and I loved every second of them.
I was very interested in dance when I was little and one day my mum and dad brought me the video of the documentary That’s Dancing. That documentary not only introduced me to Fred and Ginger and The Nicholas Brothers, but also to lots of other classic stars and films. This documentary was what really got me exploring the work of different actors and seeing more films from that era.
My dad is a big fan of John Wayne and he owned many of the Duke’s flicks on video. I would often sit and watch these films with him when I was little. El Dorado and True Grit have become great favourites of mine. In my teens and early twenties I started watching Hitchcock films, foreign language films and silent films. I’ve been a fan of the classics ever since. You can read my post about how I learnt to love Silent cinema here.  https://maddylovesherclassicfilms.wordpress.com/2019/03/10/learning-to-love-silent-films/

My regular followers already know how much I love Film Noir(yes I do consider it a genre rather than a style)and that it is my favourite/go to genre. I also really love romance, drama, thriller, comedy and horror. Check my post on Film Noir here. https://maddylovesherclassicfilms.wordpress.com/2019/11/02/noirvember-taking-a-walk-through-the-dark-alleys-of-film-noir/

You mention you are a big admirer of Sherlock Holmes. Which came first, the Arthur Conan Doyle stories or the films, and which actor is your favorite Holmes.

I do indeed! He’s such a fascinating character and is one of the few who has been taken to the hearts of readers and viewers and become a cultural icon. As someone who is on the Autistic Spectrum, I have also developed a great affection for Sherlock due to character traits and descriptions of him which seem to infer that he could well be on the spectrum himself.  I came to the stories and the Basil Rathbone film adaptations at more or less the same time actually. I love Basil in the role and he certainly looks the part. I thought that he was the definitive Holmes for some years, that is until I discovered the Jeremy Brett TV series and my opinion quickly changed. Jeremy IS Sherlock Holmes. He inhabited that role and brought the character to life in a way that I don’t think the other actors have ever managed to do. I recommend that series to all Holmes fans, although I have to say that I don’t think that the final season(The Memoirs)is anywhere near as good as the first three are.

What is your “go to” classic film when you need something to lift up your spirits?

It depends what I’m going through, but Some Like It Hot, or Audrey Hepburn films such as Roman Holiday or Paris When It Sizzles will usually do the trick. I’ll often watch old miniseries too. Anything with my beloved George Sanders and Cary Grant in can be guaranteed to raise a smile.

Doctor Zhivago – David Lean is my favourite director, but I’m afraid that I can’t stand this film. A rare dud from a master of his craft. Visually it’s stunning and beautiful, but I don’t care about any of the characters and think most of the performances come across as being quite wooden. There’s also no chemistry between Omar and Julie. David Lean was usually so good at getting the balance of intimate human drama and epic visuals just right, so that one didn’t overshadow the other. I don’t know what went wrong here.
Blow-Up - I think it’s so pretentious and it just leaves me cold.
Stage Fright - I love Hitchcock films, but I’m afraid that this one does nothing for me at all. I feel it lacks the suspense and edge of so much of the rest of his work.

For me a film is a classic if it is able to make an impact on viewers outside of the era it was made in. If generation after generation can enjoy a film and keep watching it then it is a classic. I also think that there are classics to be found in every decade of filmmaking, but the classic film era is called the classic era for a good reason. So many films that are classics were made in that era. I love all film periods, but I love the 1940’s the most. I think that was one of the greatest decades in film history, plus it gave us Film Noir! I also adore the Silent era because it’s where it all began. The artistry and innovation evident in the silent films is breathtaking. I have nothing but love for Pre-Code films too.

Why Should people care about “old” black and white movies?

Because these films are some of the greatest and most enjoyable films of all time. Without them, film most likely wouldn’t even exist now! If people are only watching films from the present day(I pity them if they are, seeing as how so many films today are total dross)they are missing out on some of the best and most influential films to have ever been made. If you don’t go back to the late 1800’s and start at the very beginning of cinema, then how are you to have any appreciation, or understanding of how film began and how it has evolved and changed over the years? Don’t just stick with films from your own country either, branch out and explore foreign language classic era(and present day)films. Japan and India in particular offer a ridiculous amount of classic era cinematic riches for you to enjoy.
All film fans, and anyone who works in the film industry, owe the Silent pioneers and the classic film era a huge debt of gratitude in my opinion. I don’t know about any of you, but it makes me so sad to think there are people today who don’t know who Akira Kurosawa, Alfred Hitchcock, Fayard and Harold Nicholas, Ida Lupino, Sidney Poitier, Claude Rains, John Ford, Billy Wilder, Jack Cardiff, Cary Grant, David Lean, Satyajit Ray, Cyd Charisse, Gene Kelly, Fred Astaire, Eleanor Powell, James Wong Howe, Powell and Pressburger, Buster Keaton, Anna May Wong, Clara Bow, Setsuko Hara, Marlene Dietrich, Oscar Micheaux, Richard Conte, James Stewart, Edith Head, Adrian, Lon Chaney Sr, Taksahi Shimura, Bette Davis, Joan Crawford, Bogie and Bacall, Barbara Stanwyck, Deborah Kerr etc are.

I dabble in creative writing. I’m also passionate about radio and love coming across those old radio shows starring classic actors. I actually worked in radio myself for some years. I’ve always admired those who can paint and sculpt, and I wish I had that amazing gift myself.