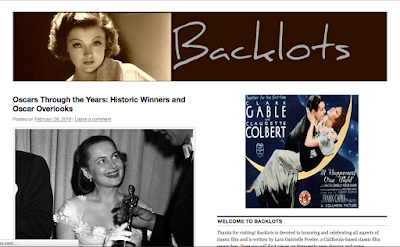 The CMBA profiles two classic movie blogs per month, on the 1st and the 15th. Today we're celebrating Lara from Backlots.

If you like a researcher's perspective on classic Hollywood, Backlots is the blog for you.

As a classic film researcher, Lara's blog covers many aspects of film history, such as film and book reviews, coverage of film festivals, and profiles of people and places associated with the industry. In her own words, she offers "pieces on the history, theory and culture of film as it relates to the study of classic cinema."

One impressive article is the 2013 interview she conducted with actress Joan Fontaine in honour of her 96th birthday. "She is very objective in her answers," writes Lara in response to a comment on her site. "It was very nice of her to take the time to answer my questions, it is so incredibly rare that she grants interviews, I feel so honored."

You can read Lara's interview with Joan Fontaine HERE. 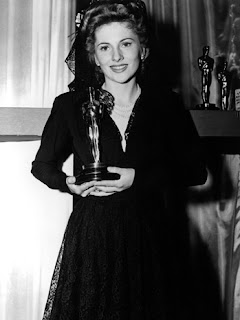 
Backlots: When I was little, I spent a lot of time with my grandparents who lived in nearby San Mateo County. My grandmother had aspired to be a film critic when she was younger, but had never been able to make it work due to societal restrictions on what a woman could do for a living in the 1940s. She made her career as a nurse, but always retained an intense passion for the movies. My earliest memories involve watching movies like Les Demoiselles de Rochefort, An American in Paris, and The Red Shoes with my grandmother, who knew everything there was to know about all the stars. When she showed me Lili, I was sold! I wanted to watch it over and over again, until my grandmother decided she would take the reins and show me another movie I would like just as much. That movie was Meet Me In St. Louis, which turned me into a die-hard Judy Garland fan. I read everything I could get my hands on, and saw all of Judy Garland's movies by the time I was 11. From there I branched out, and now I'm a huge fan of all kinds of classic film and am currently working on my first book. 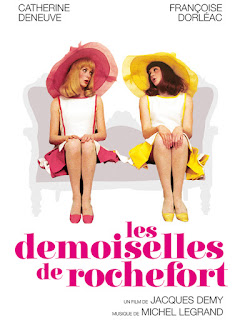 CMBA: What makes a film a "classic" in your opinion?
Backlots: Classic is a subjective term. For many, a classic film is one that has shaped culture in some way, regardless of its era. For others, it's almost a synonym for "old." My personal definition is vague. Not all classic movies are old, and not all old movies are classic. My blog tends to focus on movies from the silent era up to the fall of the production code in 1968, but that's not a hard and fast rule. 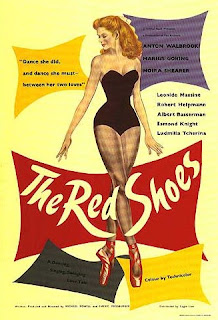 CMBA: What classic film(s) do you recommend to people who say they hate old movies?
Backlots: I like to recommend movies from the pre-Code era – from the time sound became industry standard in 1929 up through the stricter enforcement of the production code in 1934. Many people have a certain perception of old movies as being corny or predictable, and this perception almost always comes from the days when the Code dictated what could be shown and what couldn't. The pre-Code era gives people a new lens through which to view classic cinema. 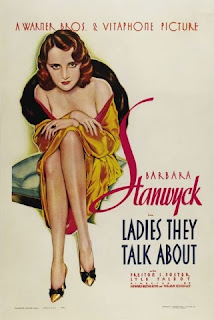 CMBA: Why should people care about classic film?
Backlots: Classic film, to me, is living history. It can give us perspectives on what people were thinking and feeling in some of the most formative points in our history. In addition to that, something was lost in the art of filmmaking when the fall of the studio system and the production code happened. Classic film is a lens to another world!

CMBA: What is the most rewarding thing about blogging?
Backlots: The opportunity to share opinions, analyses, and ideas with a wide audience. Also, I have had the opportunity to cover some of the great classic film festivals for the blog, have interviewed some fascinating people, and have met some of the most interesting people I know through blogging! 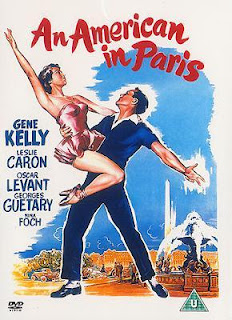 CMBA: What challenges do you face with your blog, and how do you overcome them?
Backlots: Sometimes it's difficult to keep up with posting regularly, especially when you have other endeavors that take you away from it (at the moment, it's my book project). I monitor the amount of time that has passed since I have made a post, and never go more than a month without writing on the blog. It's important to maintain consistency, even if the post is minimal.

CMBA: What advice would you give to a new blogger?
Backlots: Don't give up! It can be slow-going at first trying to build a reader base, but you WILL build that base, and it will be so rewarding. 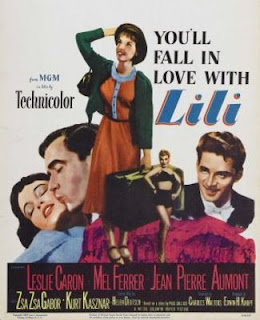 Thank you for joining us, Lara! You can visit her blog by clicking HERE.
Tweet