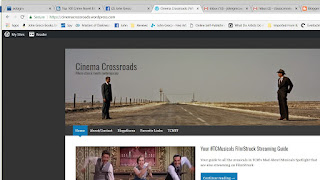 CMBA profiles one or two members every month. This edition features Julia Ricci who blogs at Cinema Crossroads.

Julia Ricci’s  Cinema Crossroads is both smart and entertaining. Take a look at her review of the cleanest condemned film in history, The Moon is Blue.  One of my own favorite post's is Julia's take on  J.D. Sheldrake, the villainous womanizer in Billy Wilder's The Apartment.  In 2017, Julia, like many other CMBA members, attended the TCM Film Festival (she returned again in 2018). Julia is also a Film Programming Coordinator for Heartland Film in Indianapolis, Indiana, but I will let her tell you more about that in the interview below.

Julia: Classic films have always been a part of my life. My parents and grandparents played a big role in introducing them to me; my first classic film was The Sound of Music when I was three years old. I started watching TCM when I was eight and Robert Osborne was my first film “professor.” I’m a history buff, so I was always fascinated by the way movies are artifacts of their time. My film studies courses in college fueled my interest even more, and the course content often overlapped with what I was studying in my History major.

Julia: A classic film is one that stands the test of time. It has universal themes that audiences can relate to.  A classic film also has a degree of re-watchability. Some define classic as pre-1970, but I don’t believe in a timeline cutoff for what can be considered classic. It may take several years before we can tell if something will stand the test of time, however. I would go as far to say that Legally Blonde or Groundhog Day are no less classic than Mr. Smith Goes to Washington.

Julia: I tend to recommend classic films based on a person’s tastes or contemporary movies they like to watch. You generally can’t go wrong with Billy Wilder movies, namely: The Apartment, Some Like It Hot, and Sunset Boulevard. Wilder films are great for teens and young adults. Alfred Hitchcock films are good, too, especially Rear Window, North by Northwest, The Man Who Knew Too Much (1934), and The 39 Steps. Other great “gateway” films are The Sting, Casablanca, Roman Holiday, All About Eve, Brief Encounter, and Singin’ in the Rain. If a person thinks classic movies are too tame, show them a pre-Code like Night Nurse, Red Dust, or Scarface. I could go on but we’d be here all day! 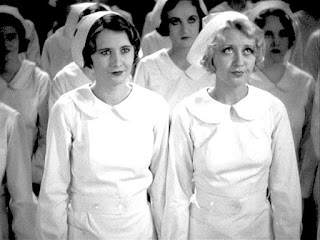 Julia: It makes me sad to hear about people who won’t watch a movie made before they were born. They’re missing out on so many wonderful films. We are starved for “original” content these days, but nothing is “original.” Every movie ever made is influenced by something that came before it, and watching classic films add another layer of depth to the contemporary movies you’re watching. I love this article about all of the classic movie references in Star Wars: The Last Jedi: https://slate.com/arts/2017/12/all-the-last-jedis-references-to-other-movies.html
And as I mentioned before, films are artifacts of their time and are a window to the past. They not only remind us of how far we’ve come, but also how humanity hasn’t changed much.
CMBA: You have attended the TCMFF in the past. What did you enjoy most: the films, the interviews, the camaraderie with other film enthusiasts?

Julia: All of the above, but the camaraderie with other film enthusiasts makes TCMFF unique. My first festival was in 2017 and I attended without knowing anyone except through social media, but it was totally fine, because everyone is there for the same reason and is just as nerdy as you are. It’s easy to strike up a conversation in line and I’ve made friends from all around the world. There are a surprising number of young people who attend the festival, too, so it’s nice to connect with classic movie fans my age.

CMBA: You mentioned in an email that you recently worked for a film festival. Can you tell us a bit about what you do and what it’s like?

Julia: I’m the Film Programming Coordinator for Heartland Film in Indianapolis, Indiana. We put on two major film festivals each year: Indy Shorts International Film Festival, which focuses on short films, and Heartland International Film Festival, which focuses on feature films. Our mission is to inspire filmmakers and audiences through the transformative power of film, and the films we program have the capacity to inspire and impact an audience beyond general entertainment. Indy Shorts is an Academy Award-qualifying festival in Live Action and Documentary Short, so our grand prize winners of those categories go on to be considered for an Oscar. In the last eight years, we’ve had six films from our festivals win Oscars and had 17 films nominated.
In a nutshell, I get paid to watch movies. I manage the submissions process for both festivals, coordinate filmmaker travel and hospitality, and introduce films and moderate Q&As.  This was our first year doing Indy Shorts, and having started my job in February there were the usual challenges of being new to an organization, but it was immensely rewarding to see audiences enjoy the films I helped select and also to get to know the filmmakers.

CMBA: What film genres do you favor?

CMBA: What is the most rewarding thing about blogging?

Julia: I don’t write as often as I used to, but I love interacting and connecting with other bloggers with similar interests. It’s been wonderful meeting some of them in person at TCMFF. It’s also rewarding when readers tell me about movies they’ve watched because I wrote about them on my blog.

Posted by Classic Movie Blog Association at 8:50 AM