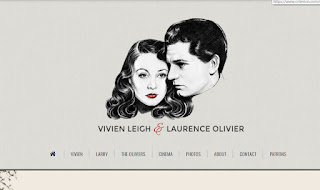 CMBA profiles one or two members every month. This edition features Kendra Bean who blogs at Viv and Larry.

Kendra Bean’s Viv and Larry is a treasure trove of information on Vivien Leigh and Sir Laurence Olivier. Launched in 2007, Viv and Larry is the go to website for everything you need to know or want to know and discuss about these two immortals. But wait, there’s more! Kendra is an author, historian and museum curator. She is the author of Vivien Leigh: An Intimate Portrait and co-author with Anthony Uzarowski of Ava Gardner: A Life in Movies. There’s more to say about this California girl now living in England, but I will let her tell you.

What sparked your interest in classic film and particular Vivien and Larry?

I credit the film Gone with the Wind for sparking my obsession with classic cinema. I first saw it (and read the book) when I was 18 and became obsessed, not only with the story, the costumes, and all filmic elements, but with the life stories of the main actors as well. I started reading any biography I could get my hands on and I found Vivien Leigh’s life to be extremely interesting. It was through learning about Vivien that I became interested in Laurence Olivier and things just snowballed from there.
During my freshman year in college I took a general film history course and knew than that I wanted to go on to study film history – which I did at both the BA and MA level.

You have had quite a journey in life. How did you go from being a small town California girl to living in England?

Thanks! Well, I did grow up in a small town in Northern California but went to university in Orange County and stayed down there for about four years after graduating. I knew I wanted to do something in film history and didn’t know how to get into archiving or writing. Lots of my Film and Media Studies friends from college moved to LA to work in film production, but I knew that wasn’t for me. Finally, after working as an administrative assistant at UC Irvine for a few years, I decided that if I was serious about being a film historian I’d better go to grad school.
I’d always wanted to live in London for a while. Being young and with no real obligations tying me to CA, I applied to the Film Studies MA program at King’s College London. And then I was accepted and received a couple of scholarships to help with overseas tuition. I graduated with my MA in 2011 and a lot has happened since then. Aside from a couple of years when I had to move back home due to my work visa expiring, I’ve lived in England ever since. I’m now married to an Englishman and have a permanent job here so I’m assimilating!

Your website mentions you are currently working as a Collections Assistant at the National Science and Media Museum. Can you tell us about what that entails? It sounds mysterious!

Yes, I love my job! It’s essentially the equivalent of being an assistant curator. I work behind the scenes and am responsible for facilitating access to the museum’s collections of photography, film, and television objects. For example, I run our monthly Research Week sessions where I help members of the public research our archives. I also manage the Royal Photographic Society volunteers who are currently cataloguing the archive of photographer Tony-Ray Jones. Cataloguing objects (I’m Currently working my way through interesting subjects in the Daily Herald newspaper picture library), giving tours of the collections stores, assisting the rest of the curatorial team with accessions and other projects, and promoting the museum via social media and appearances on BBC radio (for example) are also things I partake in.

You have written two books, Vivian Leigh – An Intimate Portrait and Ava: A Life in Movies (co-written with Anthony Uzarowski). Can you tell us a little on how they came about?

The Vivien Leigh book was a passion project that germinated about 9 years ago and grew out of my work on vivandlarry.com. I really wanted to put together a nice coffee table book about Vivien as there hadn’t been one since Angus McBean’s Vivien: A Love Affair in Camera (1989). So, I figured, why don’t I just do it? Of course, at the time I had no idea how to go about getting a book published and the process was a steep learning curve. But I was very lucky to make connections in the publishing and writing fields who encouraged me along the way and gave me tips.
The Ava book came about due to the success of the Vivien book. In 2015 I was chatting with my agent about what to do next and she suggested – rightly – that I should do a different subject before returning to Vivien. I had known a lot about Vivien before I started researching that book and Ava would be a different process. Anthony, who I’d known for several years and who also has an MA in Film Studies, runs an Ava Gardner Facebook page with over 200K fans. We got to talking and decided to team up to celebrate Ava’s life and legacy.

I know a lot of research was involved with both books. What were the most interesting facts you learned about Leigh and Gardner while doing research for your books?

The most interesting thing about researching the Vivien book was having access to Olivier’s archive at the British Library and getting a sense of just how very intertwined their lives and careers were between 1937 and 1960, and even after their divorce. With Ava it was a joy discovering her ribald sense of humor, her worldliness, and her great capacity for friendship.

I don’t think a film is necessarily “classic” just because it’s old. To me a classic implies longevity and staying power. It needs a compelling story, good acting, well-formed characters.

Considering I used to be that person, I’d say ‘You’ve got to give them a chance’. Films I’d recommend include: Gone with the Wind, Wuthering Heights (1939), City Lights, Psycho, The Wizard of Oz, etc. Start with the big names and work your way inward.

Can you share any projects you are currently working on?

In the past year I’ve acquired some major pieces of Leigh and Olivier memorabilia, including personal photo albums from the Vivien Leigh estate sale at Sotheby’s in 2017, and a massive Laurence Olivier ephemera collection which I’m currently cataloguing and repackaging. I’ve recently started a Patreon page for vivandlarry.com where people can help me purchase archival storage supplies and to help keep the site online. I’m also working on a book project do with the snapshot albums and will hopefully have more to share about that in the not-so-distant future. And finally, my Vivien book is currently being developed into a mini-series with actress Natalie Dormer. Exciting things ahead!

Posted by Classic Movie Blog Association at 8:06 AM