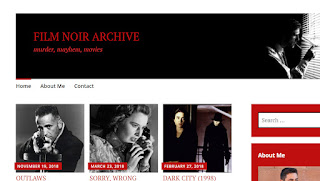 It was a combination of my grandparents and my dad. My grandparents introduced me to Abbott & Costello from an early age, particularly their monster movies, and I've been hooked ever since. I can't even tell you how many times I watched "Abbott & Costello Meet the Invisible Man." My dad has always been a huge fan of Humphrey Bogart, so the film noir side, the side that appreciates stuff like "High Sierra" or "The Maltese Falcon" definitely comes from him. He succeeded in convincing me that nobody is cooler than Bogie.

I didn't understand a lot of what was going on as a kid, but the sense of magic, of movie stars saying memorable lines while looking like a million bucks, is a language that communicates to everyone. It's why, decades later, these films remain the benchmark for what we consider to be classic.

You’re a monthly contributor to the Classic Movie Hub blog which several of our fellow members also contribute. Your column specializes in Film Noir. What attracted you to the dark world of noir?

It's funny because, like most people, I didn't know what a film noir was the first time I saw one. I just thought "The Maltese Falcon" was a killer movie with some clever dialogue. Eventually, through movies like "Double Indemnity" and "The Killers", I began to realize that there was a style, and that the style was known as "film noir."

I think everyone is enticed by the dark side of human nature, and for me, film noir is the perfect summation of that darkness. It is the most seductive kind of viewing. Women act like devils and are made to look up like angels. Men fake honor and shoot each other in the back when the other isn't looking. Nobody is innocent, and nobody gets away clean. Sure, I see stories get recycled, and I could list off dozens of clichés, but I never get bored watching them.

To someone not familiar with Film Noir what films would you recommend, and would you tell us some of your favorites.

I'd start with "Out of the Past." It has everything (the flashbacks, the narrative, the private detective) that you could want from a film noir and then some. Then you can break them down into niche categories. For romance noir, I'd say "The Postman Always Rings Twice", for detective noir I'd say "The Maltese Falcon", and for heist noir, I'd say "The Killing."

It's always hard to narrow down favorites, but here are five that never get old for me and why:

- "Scarlet Street" (maybe the biggest downer in film noir history)
- "Kiss Me Deadly" (extreme to the point of parody, and an ending like no other)
- "Night and the City" (captures the desperation of the con man perfectly)
- "Dark Passage" (underrated Bogart flick, beautiful San Francisco scenery)
- "Murder, My Sweet" (probably the most authentic of the pulp adaptations)

What other film genre(s) do you favor?

I've yet to watch a screwball comedy that I didn't love. They put modern rom-coms to shame, especially when you're talking about classics like "My Man Godfrey", "The Awful Truth" or "What's Up, Doc?." Even the lesser-known ones. I watched a film on TCM called "The Ex-Mrs. Bradford", starring William Powell and Jean Arthur, and it had me in stitches. I also have a soft spot for the ones that tow the line between comedy and mystery, like "The Thin Man" or the Charlie Chan films with Sidney Toler.

What is your “go to” film when you need something to lift up your spirits?

"Murder by Death" always puts me in a good mood. Its a parody of the whodunit genre, and the great Neil Simon comes up with some of the funniest situational gags I've ever seen on film. Just thinking about it makes me want to laugh. The cast is terrific (Peter Sellers, Truman Capote, Peter Falk, Maggie Smith, etc) and if anyone watches it and likes it, there's a companion film, "The Cheap Detective", that will also hit the spot.

What makes a film "classic" in your opinion?

Whenever I read other CMBA profiles, the answer to this question has always been interesting. There's no surefire way to define a classic, but I'd say a classic is a film that stands the test of time through iconic moments and quotes. Films like "Casablanca", "Lawrence of Arabia" and "Star Wars" are classic because we can still quote them today, or dress up like one of their characters. They are part of the pop culture landscape. Everyone has their favorites, including me, but when we can all make and understand the same reference, thats a sign the film in question is here to stay.

What film(s) considered a classic do you absolutely hate?

There are a handful of Stanley Kubrick films that I cannot stand. While his earlier works ("The Killing", "Paths of Glory") are rightfully considered classics, the films he put out after that are, to me, at least, mercilessly boring. I specifically mean "Lolita", "A Clockwork Orange", and "Barry Lyndon", the latter of which I watched during a college course and still couldn't appreciate. Kubrick was a brilliant technician, but too often it felt like he sacrificed the emotion of his characters for the visuals.

Do you have interest in other pop culture arts?

I'm a huge fan of classic rock music, particularly during the 1960s. When I'm not watching or writing on classic film, the odds are I'm listening to classics from The Beach Boys, The Byrds, and, of course, The Beatles. I've gotten a chance to write retrospectives on some of my favorite albums, like The Beach Boys' "Pet Sounds", but I'd definitely like to do more in the future!
Tweet

Posted by Classic Movie Blog Association at 7:02 AM