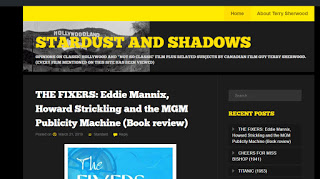 CMBA profiles one or two members every month. This edition features Terry Sherwood who blogs at Stardust and Shadows.

Celebrating six years, Terry Sherwood's Stardust and Shadows is filled with film reviews, book reviews and more. He grew up on movies, thanks to his film loving Dad. As a kid, like many, he loved horror movies, and still does, but his blog much more: westerns, noir, and more. Terry has a second blog, Nitrate Visions, and also host two Youtube podcast shows. But instead of me telling you, let's here from Terry.

My Father was a huge fan when he was growing up. He once told me that when he was young he made a movie studio out of little card board boxes, cut faces from fan magazines and put them onto figures that he moved around. He would take me to film in the movies houses later one; the first film I remember seeing was with him was BILLY BUDD. Got interested in Theatre for  what reason I have no idea. Got myself a Degree in Theatre Arts.   Read Flynn’s book that  my father gave to me MY WICKED WICKED WAYS many times which triggered more  reading   acquiring  and other  things in those pre-internet days.

You are a big horror film fan. Correct me if I am wrong, but you love for the horror genre spans more than just movies but also books and comics. Was the horror genre your introduction to the world of pop culture?

Yes it was.  I was and still am a ‘Monster Kid”.  Big fan of TV shows like THE MUNSTERS.  I still have my issues of FAMOUS MONSTERS OF FILM LAND magazine.  I also read graphic story magazines such as CREEPY, EERIE and MONSTERS UNLIMITED which had funny captions by Stan Lee when I could find them.  I went to local triple bills at Rialto theatre on Saturday afternoons when I was allowed to those of Hammer Studios and Amicus releases.  Then came our version of SHOCK THEATER on local TV which was called HORROR HOUSE which ran the Universal films, Inner Sanctums etc. I would record the soundtrack on cassette and listen to them over and over. I read Edgar Poe, and other authors not really getting an appreciation or  understanding  What really got me was  Ballantine Books comic paperback adaptation of  DRACULA which I read till it fell apart.  I also had an LP record which I still have   AN EVENING WITH BORIS KARLOFF AND HIS FRIENDS which had  audio excerpts and  narration. Outside of Horror genre.  I was around for  the Adam West/ Burt Ward Batman series. Lot of influences not  knowing why.

Your blog is much more than horror films. Can you tell us what other film genres you favor and write about?

Honestly it’s whatever moves me to write and strikes me as interesting. STARDUST AND SHADOWS is about many things in film mostly it’s about the wonder of a good story, strong acting and being human.  Try to give things a different spin in a conversational style.  Genre wise:  we go to Film Noir, Westerns,  Pre-code film,  those ‘Women’s Pictures,” even  youth exploitation for the sheer fun, longer  articles on people like  Warren William, Max Factor,  Jeffery Lynn. I also try to show Canadians in  Classic Hollywood like Norma Shearer, Walter  Pidgeon,  and Yvonne De Carlo when I can, so many of them, and  I am Canadian.

What makes a “classic” film in your opinion?

A Classic film to me is timeless feeling that an individual has when watching something that many reoccur in your mind.

You have a second blog dedicated to the world of horror (Nitrate Visions).  Can you tell us a little about that?

NITRATE VISIONS is the companion site to STARDUST AND SHADOWS on the Horror or  as I prefer to say  the Nightmare genre.   It contains short reviews which I call SILVER BULLETS covering some  film of  today and yesterday that interest me.  I also get quite a few  screeners  from Indie film makers mostly from Europe which seem  more open for  review.  NITRATE VISIONS also has literary reviews mostly small press from the genre which I receive as active member of worldwide recognized organization HORROR WRITERS ASSOCIATION.

You also host a Youtube podcast series. Can you tell us about that?

SINISTER INCLINATIONS is a Horror Youtube series with James Saito and myself in which we  talk very informally and  totally off the cuff  about what  we  watched, read or think about the  genre. We do have guests that we interview like film people, Ghost hunters, musicians in the  Horror  rock and roll scene.   It is not scripted except  who is  coming on  or  a particular film  both James and  I watched  and  will speak on.    We also make fun of ourselves quite a bit yet punctuate it with some challenging remarks.

SINISTER INQUISTIONS is the companion show which features video interviews with film makers or anyone that we record from Zoom or Skype. Chat about them, their work  career,  recent  work etc. in more in depth format  Gives them a boost and  we   make contacts.

What challenges do you face with your blog and how do you overcome them?

Every film, book, comic that I review, comment on I view so its finding the time so I set up an informal schedule on days off  sometimes three a  night into early morn.  Writing is best for me in early evening.  I also am a musician and have a full time job plus a home life.  I am so lucky for support, help and understanding from my family.  This isn’t work.  Its magic time.
Tweet