Blog of the Week: Warren-William.com

On his blog site Warren-William.com, Cliff Aliperti states in his introduction: "Had you asked me ten years ago who my favorite actor of all time was I would have probably answered either Clark Gable or Humphrey Bogart, perhaps Orson Welles if my mind was running on a slightly higher plane that day. But our digital age has granted us exposure to so many more stars of the past that while I still love all of those actors, plus so many more, not one of them does any more for me today than a far lesser known star of the thirties and forties by the name of Warren William. I have a strong feeling that if you can already picture Warren William just by mention of his name, then you may already agree–this site is for you and for those who are just discovering Warren William for the first time."

Warren-William.com contains film reviews, clippings, collectibles--just about everything you could want to know about the celebrated actor. 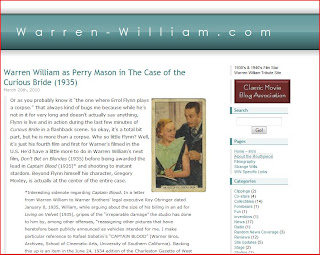 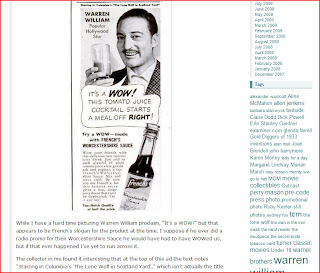 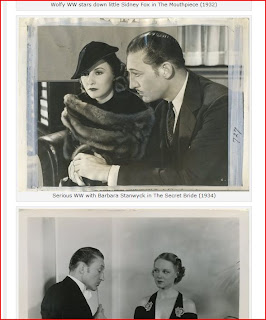 Warren-William.com can be found at: http://warren-william.com/blog/.
Click on the links below to visit some of the most recent posts at Warren-William.com:
Warren William as Perry Mason in The Case of the Curious Bride
Published "Strange Wills" Episode Guide with Reviews
That's Warren William Not Williams
My Top 10 Introduction to Warren William Recommendations
Tweet
Posted by Rick29 at 2:10 PM No comments:

Blog of the Week: The Vintage Vamp

The Vintage Vamp writes: "I'm a child of the 80's, who is also in love with a few decades I grew up nowhere near. I can't seem to get enough of the films, the music, and the classic style of the 20s-40s and started this homage as an outlet for myself and others who feel the same. xoxo!"

Her blog contains reviews of classic films and profiles of classic performers--actors, actresses, and singers. Earlier this year, the Vintage Vamp counted down a list of her top male and female stars. She also participated in For the Love of Film: The Film Preservation Blogathon. 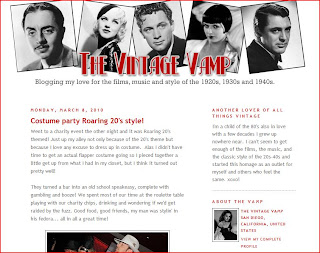 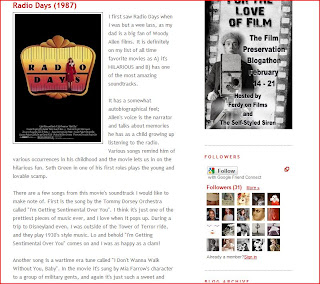 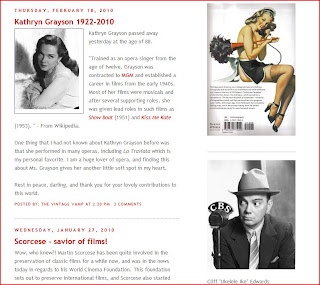 The Vintage Vamp blog can be at: http://thevintagevamp.blogspot.com/.
Click on the links below to visit some of the most recent posts at The Vintage Vamp:
Radio Days (1987)
Kathryn Grayson (1922-2010)
The Musical Joys of I'll See You in My Dreams (1951)
Top 10 Actresses
My New Favorite Voice
Tweet
Posted by Rick29 at 10:13 PM No comments: