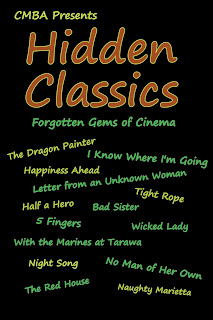 Each month, the CMBA profiles a classic movie blog. Today we're featuring Shawn from The Everyday Cinephile.
CMBA: What makes a film a “classic” in your opinion?
The Everyday Cinephile: For me, the main qualification for a film to become a classic is that years after its release a film resonates with modern viewers on an emotional level. A film can have the most beautiful cinematography, the most brilliant script, and the best cast of actors and technicians but won’t be considered a classic unless it can put all those parts together to connect with audiences long after its release. I don’t think of classics as being a robust, unchanging list of essential films. Each generation, each country, each community is going to have different films that connect and resonate with them. Some films are going to play to people with certain lived experiences or certain viewpoints but might not work for other people. It’s quite exciting that no matter how old or obscure a film is today, it still has a chance to connect with modern viewers in the future. As films from as far back as the silent era continue to be restored and made available to a diverse group of film fans, more and more films are entering the public discourse and being deemed a classic. Classic film is so fun because we as film fans get to define and redefine what makes a film a classic as society evolves and changes.
CMBA: What genres do you favor?
The Everyday Cinephile: While I tend to jump around different genres quite regularly, I most frequently spend my time watching silent and pre-code films. I’ve always been fascinated with the first filmmakers and how they turned a technological marvel into a worldwide industry in just a few years. Whether it was George Melies, Lois Weber, or King Vidor, it never ceases to amaze me what these trailblazers were able to accomplish over a century ago that still resonates with me today. Like silent films, pre-code films are revolutionary in their own way. I love watching filmmakers gradually learn how they can integrate sound after silent filmmakers had nearly perfected the medium already. Also, the transgressive nature of pre-code films trying to get away with as much sex as possible in the early 30s is so enjoyable that it is hard for me to get enough of it.
CMBA: Why should people care about “old” black and white movies?
The Everyday Cinephile: People should care about movies from the past because they have so much to offer. Old black and white movies (and the early color films too) transport us to a different time. They share with us perspectives and viewpoints that aren’t affected by our own current cultural zeitgeist. Classic films stay relevant because humans haven’t changed much over the past 125 years. I love putting on a classic film to relax and forget about my current problems for an hour or two only to realize afterwards that this ninety-year-old film actually had something to say that could help me better navigate whatever problem I had wanted to forget about and take a break from in the first place. If anybody thinks “old” black and white movies are boring, hokey, or stale, they just haven’t found the right type of classic films that resonate with them yet.
CMBA: What classic films do you recommend to people who may not have seen many older films?
The Everyday Cinephile: Girl Shy (1924): When introducing people to silent films, I think it is important to give them something familiar to work with. Girl Shy is the perfect mix of the familiar and the new, following a romantic comedy template that is familiar to modern viewers while showcasing the unique genre of silent comedy with some of Harold Lloyd’s best physical comedy.

Union Depot (1932): One of my favorite parts of pre-code films is their short runtimes. Union Depot is one of many that clock in at just over an hour and never waste a second. Joan Blondell, Douglas Fairbanks Jr., and Guy Kibbee are all great in this pre-code film that wonderfully manages to capture the playful spirit of the pre-code era alongside a frank depiction of Depression life.

Laura (1944): I can’t think of a classic film that is as engrossing as Laura. Beautifully shot with an amazing cast including Dana Andrew, Gene Tierney, Vincent Price, and my personal favorite Clifton Webb, this mystery pulls viewers into the magic of Old Hollywood that they’ll want more of.

Sunset Boulevard (1950): Sometimes a film’s background can be just as interesting as the story it tells. Sunset Boulevard packs tons of film history, including performances from silent era luminaries Gloria Swanson and Eric von Stroheim and cameos from Buster Keaton, H.B. Warner, and Anna Q. Nielsen, into one of the best film noirs. This film is an incredible introduction to the dark, seedy genre of film noir that also provides viewers a gateway to learning more about silent films.

CMBA: What is the most rewarding thing about blogging for you?
The Everyday Cinephile: Blogging has helped me slow down and sit with my thoughts and feelings about films. When there are so many films on my classic film watchlist, I sometimes rush through several films in a week without dissecting them or properly developing a reaction to them. Blogging gives me the chance to do a deep dive into a specific film or a topic that interests me. Since I’ve been blogging, I’ve read more books about classic films, perused through dozens of primary sources like movie fan magazines, and sought out films I might not have been otherwise interested in. Hopefully, by writing and sharing my journey through classic film on my blog, others can discover films and history that peaks their interest or shines a light on a specific corner of classic film they didn’t know existed.
Tweet
Posted by nettybo at 12:30 AM No comments: