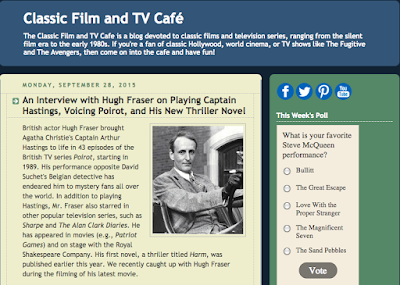 The CMBA is excited to start a new series that profiles our member bloggers. Two classic movie blogs will be featured each month, one on the 1st and the other on the 15th. Today we're toasting the blog (and the man) who started it all: Rick from Classic Film and TV Café.

Classic Film and TV Café is a lively blog that always teaches you something new. Topics include classic film and television shows, obscure facts about classic celebrities and the famous Movie-TV Connection Game (click HERE for a sample).

One of the outstanding features of this blog is the impressive amount of interviews the Café conducts. Rick has interviewed a surprising number of classic film and television insiders, including celebrities and biographers.

"I've been fortunate enough to interview several classic film and television stars," says Rick. "One of my favorite interviews was with three-time Oscar nominee Piper Laurie. I sat beside her for almost an hour at a nostalgia convention, and she patiently answered my questions as she autographed photos." (You can read the interview HERE.) 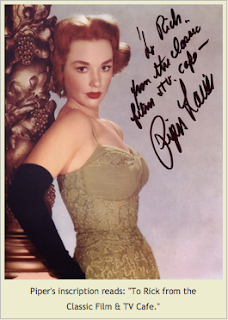 Hispanic Heritage Month, whose roots go back to 1968, begins each year on September 15 and ends on October 15.  In celebration, Once Upon a Screen presents the Hollywood’s Hispanic Heritage Blogathon to commemorate the impact Hispanics have made on Hollywood.

Posts celebrating Hispanic Heritage in Hollywood that focus on actors, filmmakers or films that celebrate, depict or examine aspects of Hispanic culture are welcome.  Or, you may also choose to discuss the treatment of a Hispanic Hollywood player or players in general on-screen or behind the scenes.  The possibilities are endless.  While this blogathon’s focus is primarily “classic” Hollywood cinema, Hispanics are making an impact in films today so if you’re burning to write about a contemporary Latin American actor, filmmaker or film, that’s fine, too.
For more details on this blogathon, click HERE.
Tweet

Posted by Classic Movie Blog Association at 12:23 PM No comments:

The Winners of the 2015 CMBA Awards

In Defense of Lina Lamont - The Vintage Cameo

History Through Hollywood: or, What I Learned from Classic Movies - The Blonde at the Film

Best Profile of a Classic Movie Performer or Filmmaker

CMBA Forgotten Stars Blogathon : Eddie Cantor - Once Upon a Screen 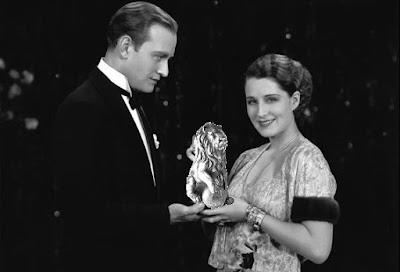 Now stop hanging about this blog and go out and celebrate!

The Week of the CMBA Awards!

The official nominees for the 2015 CMBA awards have been decided. Congratulations to all of these fine bloggers! Below you will find the links to all of their posts. If you did not yet make time to read them, now is the time to do so. When you are ready to vote then check your inbox for the email marked "The 2015 CMBA Awards" and you will find a link to the survey. Vote for only one nominee in each category!

The ballot for the CMBA Awards will be open until September 16th.

If you have any questions about the awards, this year's submissions, or the voting process, you can leave a comment in the box below or send us an email here.

Good luck to all of our nominees!

(Note : Biopic Theater was dropped after one day when the blogger asked to have an article added in a different category in its place )

Alas, we won't be holding a banquet after the awards...I just thought this was a cool photo.
Tweet
Posted by Classic Movie Blog Association at 5:56 PM 1 comment: