The latest CMBA eBook, Femme/Homme Fatales of Film Noir, compiled by Annette Bochenek, is now available at Smashwords for free! It is also available at Amazon for .99 cents with proceeds going to Film Preservation. 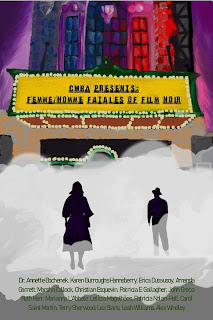 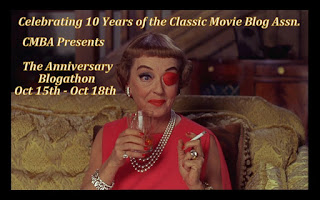 It's still summer, but the fall season is coming soon and with it comes the CMBA Fall Blogathon. This year is special as we celebrate the organization’s 10th anniversary! The CMBA is the brainchild of founding father Rick Armstrong (thank you, Rick!). In celebration, our subject this time around is anniversaries. Anniversaries of all kinds: Wedding, job, film directors, film anniversaries, for example, the twenty-fifth anniversary of Pulp Fiction (in five-year increments only 15, 20, 25, 30, etc.). Another example would be the anniversary of acting teams: Gable and Lombard, Laurel and Hardy, etc. (any anniversary year is acceptable). Be creative. If you’re not sure, ask!

Just a few rules. Only one film, acting team, director, etc. If a film is taken or an acting team you will be notified to make another selection.

Join us for The Anniversary Blogathon. The dates are Oct. 15th through Oct 18th.

Provide me with your selection and the date that you would like. Date selected may be subject to change if we need to balance out the activity.

The Contributors So Far... 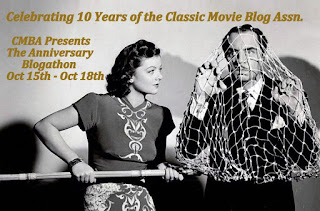 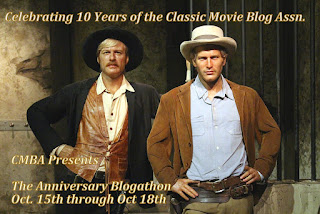 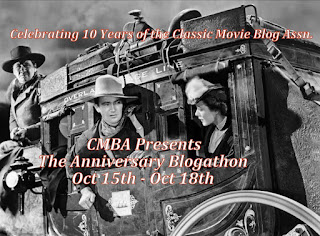 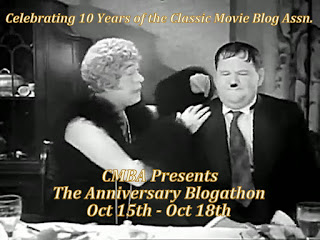 Tweet
Posted by Classic Movie Blog Association at 8:05 AM 26 comments:

CMBA Profile: Anybody Got A Match?

CMBA profiles one member every month. This month's interview is with Alex WIndley whose home base is the Anybody Got a Match? blog. Alex covers a wide variety of genres but admittedly favors musicals and... well I let the lady speak for herself.

Well, in high school, my English professor offered a Film Appreciation class where she showed us all the classic films. From Casablanca, to Singin In the Rain, I slowly developed an interest for the golden age of Hollywood.

Oof. That’s a tough one, personally, I absolutely adore musicals and the occasional film noir when I’m feeling angsty!

I very much like your categories, particularly Musings and My Obsession With. They both look like a combination of your love of film, history and personal musings. How did you come up with this concept?

Musings was an idea I had when I wanted to write about Paul Newman’s character in Cool Hand Luke but didn’t necessarily want to review the movie. It’s great to share your classic movie thoughts that you have lingering in your heart. My Obsession is exactly what the title says, I’ll thank Audrey Hepburn for that one! Ha-ha.

What is you “go to” film when you need something to lift up your spirits?

Seven Brides for Seven Brothers hands down. It was the first classic movie I bought on DVD and I just adore it whenever it comes on TCM.

Hmm, ok let’s see. Well, to be fair, I really don’t like Breakfast at Tiffany’s. Due to the strict code film makers had to abide by, a lot of the original content from the book didn’t make it into the movie. I also feel the same way about Rebel Without a Cause and James Dean for that matter.

It must have been made before 1965, after 1965 I don’t really consider it to be a part of the Golden Age. As for my favorite period I really enjoy the late 40s early 50s when it comes to film. It’s a very interesting era in terms of film!

Many “classic” film lovers do not like modern day movies. What are your thoughts and where do you stand?

I think it’s hit or miss really. I enjoy documentaries a ton, and there’s a lot of modern films that I would consider my favorites. I think you must compartmentalize ‘modern films’ and ‘classic films.’ I separate them, so it doesn’t cross over too much.

Do you have interest in any other arts that you can share?

Tweet
Posted by Classic Movie Blog Association at 10:57 AM No comments: