This season, our blogathon theme is “Laughter is the Best Medicine.” Feel free to write about a person, performance, or film of interest to you that is a fitting prescription for lots of laughs and comedic entertainment.

Just a few rules. Only one film, acting team, director, etc. If your selection has already been claimed, you will be notified to make another selection. As always, be creative. If you’re not sure about something, please ask!

The Laughter is the Best Medicine Blogathon runs from Oct. 19-Oct. 22.

Here is our outline of CMBA member participants thus far: 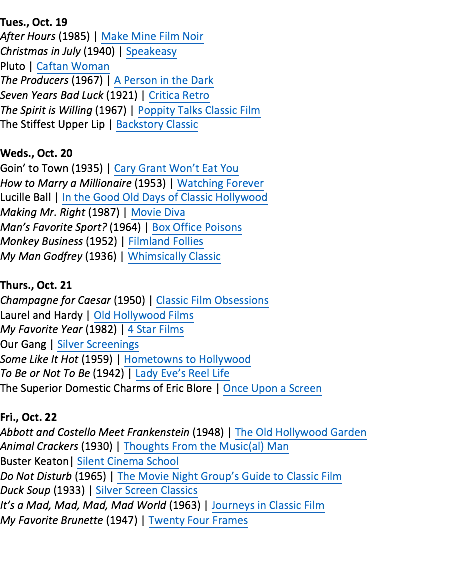 We look forward to an exciting Fall blogathon! 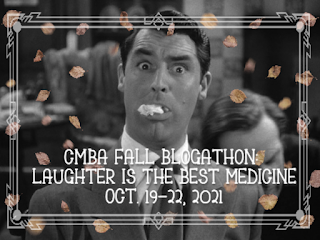 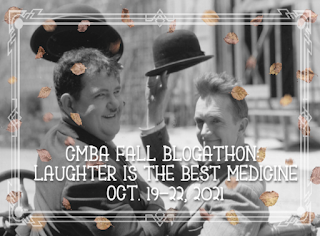 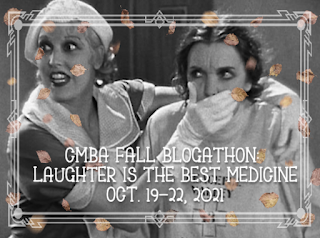 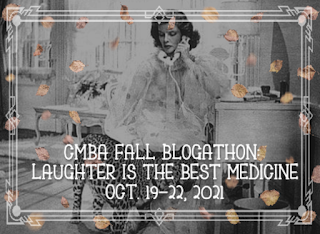 Each month, the CMBA profiles a classic movie blog. For September, we’re featuring Steve Jarrett of The Cinema Century.

CMBA: What makes a film a “classic” in your opinion?
THE CINEMA CENTURY: Time is the ultimate arbiter of value. If a work is still able to touch people, to entertain them, to add meaning to their lives decades after its creation, then it has earned the right to be called a classic. Critics in Charles Dickens's day disdained his writings. They were wrong, and the proof is that his books are still widely read and appreciated today. Similarly, films that continue to be sought out and enjoyed many years after their release by volunteer viewers (that is to say, viewers who are not assigned to watch them for a class) are entitled to be called "classics."

CMBA: Why should people care about “old” black and white films, especially those that are one hundred years old?
THE CINEMA CENTURY: Anyone who claims to care about cinema should be interested in older films. After all, current films didn't just spring out of nowhere. Tarantino’s films look the way they do in part because Jean-Luc Godard’s films looked the way they did. And Godard’s films, in turn, owed much to Alfred Hitchcock. And Hitchcock’s work was deeply influenced by the work of Sergei Eisenstein. And Eisenstein’s work was influenced by D.W. Griffith’s films. It’s no different than any other art form in that respect. If you read MOBY DICK without having read Shakespeare, you won’t get where Melville’s language came from. If you listen to Mozart’s symphonies without having listened to Bach, you won’t know what inspired those exquisite fugal passages. Paying attention only to today’s art is the unmistakable mark of the dilettante.

CMBA: What classic films do you recommend to people who may not have seen many older films?
THE CINEMA CENTURY: From the silent period, I recommend Buster Keaton’s films. SHERLOCK JR. is a good one to start with. Also Fairbanks in THE MARK OF ZORRO. From the 30s, probably screwball comedies like BRINGING UP BABY. From the 40s, something by Preston Sturges—probably SULLIVAN’S TRAVELS. And Huston’s THE TREASURE OF THE SIERRA MADRE.

CMBA: What is the most rewarding thing about blogging for you?
THE CINEMA CENTURY: My blog draws heavily from the many industry trade papers from a century ago that have been digitized and made available online. Paging through those publications provides a real education. You can learn as much from the ads as you can from the articles. The fun of it for me is to pull out a clipping from a century ago and then put it into historical context—explaining, for example, how a minor story from the back pages would soon help to bring about front-page news. It’s great fun to come across a fleeting mention of a name that will eventually come to dominate the industry. Reading these trade papers in their original form vividly brings to life the history of the industry in which the cinema took root and flourished.