Each month the CMBA profiles one of its members. This month our profile is on Kevin Maher of Top 10 films.

I was in a job interview & the interviewer asked me to name a few of my favorite films.  I froze and spit out a few of the first titles that came to mind, kicking myself later for the choices.  After that I carried a list of my 10 favorite films in my wallet for quick reference (very nerdy, I know).  Every once in a while, I would update the list, so I guess that’s where the idea for Top10FilmLists.com came from.  Of course, it took me about 15 years before I started doing anything about it.

2. Which of your lists did you most enjoy compiling and why?

Every list opens up something I hadn’t seen before or something I hadn’t thought of, so that’s a really hard question.  I try to see as many films as possible when creating a list, which obviously involves seeing films I’ve never seen and in some cases never even heard of.  I also try to read at least one book on the subject of the list to add more background on what I’m watching.  I’m going to name 2 lists that gave me particular joy in creating:  the Top 10 Pre-Code list and the Ernst Lubitsch list.  The Pre-Code era is one of my favorites & every film offers something interesting, unique and surprising.  I’m a big fan of the Pre-Code.com blog and I find that the more pre-code films I watch, the more I want to see.  As for Lubitsch, which dovetails with the pre-code era, it was watching his German silents from the late teens that really energized me.  I had never heard of Ossi Oswalda, but was blown away by her performances in The Doll, I Don’t Want to be a Man and The Oyster, as well as early evidence of the “Lubitsch touch.”

3. If you were to recommend five classic films to a first timer, which five would you recommend and why?

Sunset Boulevard:  I love everything about this movie & it opens up so many things to think about & talk about.

Singin’ in the Rain:  the quintessential musical, with a wonderful splash of Hollywood history.  The joy in filmmaking is clearly evident in every scene.

Sunrise:  My favorite film of all time!  I think it’s a wonderful example of everything that the silent era was.  From lyrical camera movement, to limited title cards, beautifully constructed frames, and a wonderfully melodramatic storyline, Sunrise overcomes novices’ fear & concerns about silent films (I know it’s not purely silent, but I think I would be a bridge for a newcomer to enter into silent film from a comfortable place).

My Man Godfrey: William Powell & Carole Lombard, in my favorite screwball comedy, shows the silliness & smartness of the 30’s, as well as showcasing 2 of my favorite actors.

Bonnie & Clyde: I think this film shows the evolution of movies after the Code’s disintegration, as well as the revolution of “new Hollywood” of the late 60’s, in glorious & violent color.  A great example of film as a reflection of the time in which it was made.

4. Why should people care about “old” black and white movies?

Between Jazz & movies, America was the primary driver of the 2 greatest artistic movements of the 20th century, in my opinion.  I like to call vintage movies “classic” & to borrow a common phrase, “it’s not old if you’ve never seen it!”  People should care about classic movies just like they should care about all art, as something to be looked at for how it influenced what they like today.

5. Who are your favourite filmmakers?

Lubitsch, Wilder, Huston, Sturges, Wellman & Hawks, to name a few.  When I stared my blog I considered myself an auteurist, but have since reconsidered how I feel about movie making as a process.  While certain directors undeniably put their imprint on most of their work, I now give more credence to the collaborative nature of film making & enjoy studying writers, producers, cinematographers, as well as actors & directors.

6. What do you think of modern cinema?

Just as I won’t listen when people disparage “old movies” as bland & outdated, I don’t subscribe to the thought that there are no good movies made today.  Sure, most of the Hollywood studios make all their films for teenage boys, but there are great films being made all the time.  Having just left 20th Century Fox last year, I can attest that Fox Searchlight does wonderful work in both production & acquisition, finding quality filmmakers & giving them a fairly large platform. (hopefully that will continue under new management). Similarly, foreign films are more broadly diverse & better made than ever before.

7. Your top 10 favourite films is quite a mix of genres. Why do you consider these ten films as being your favourite.

The list as it’s currently constituted reflects my auteurist origins & I’m actually working on a refresh.  Whereas the current list reflects my favorite films from 10 of my favorite directors, the new list will likely be more of the “10 films I could take to a desert island & NEVER get sick of watching”. I write a weekly newsletter & I got more feedback on the idea of refreshing my Top 10 All-time favorites than anything else I’ve written about in the last 6 months.   I’ve also seen close to 1,000 films since I made that list, so it’s time for a refresh.  As I note right at the top of my landing page, ALL of my lists are completely subjective & reflect only what I’ve seen & how much I like it.  I always welcome feedback & criticism to help shape any of the evolving lists!

8. If you could compile a top 10 list of films, directors or actors for a major entertainment publication, who or which films would the list focus on and which publication would you write for?

Maybe helping Victoria Wilson complete the second volume of her biography of Barbara Stanwyck!  Seriously, if I was going to be greedy I’d say to write for EW, to have the broadest reach.  If I was being studious, I’d write for Film Comment & if I wanted to be happy, I’d create a Top 10 list for each of the major studios of the classic era.  I figure that would take a lifetime to do a thorough job! 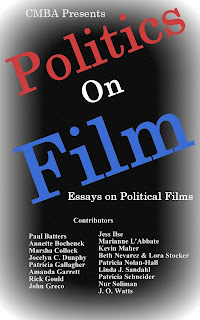 The latest edition in the Classic Movie Blog Association’s eBook series is now available at Amazon and Smashwords. The eBook features keynote films focusing on politics in the movies. Here you will find seventeen essays covering political films dating back to the 1930s and up thru the 1960s. “Politics on Film” contains a wide range of political points of view from the courageous to corruption to satire. Among the movies included in this collection are well-known works like The Best Man, All the King’s Men, Duck Soup, and Yankee Doodle Dandy, to more obscure films such as Medium Cool, What Every Woman Knows, and Left, Right, and Center.  Contributors: Paul Batters, Annette Bochenek, Marsha Collock, Jocelyn P, Dunphy, Patricia Gallagher, Amanda Garrett, Rick Gould, John Greco, Jess Ilse, Marianne L'Abbate, Kevin Maher, Beth Nevarez and Lora Stocker, Patricia Nolan-Hall, Linda J. Sandahl, Patricia Schneider, Nur Soliman, and J.O. Watts.

Tweet
Posted by Classic Movie Blog Association at 8:59 AM No comments: