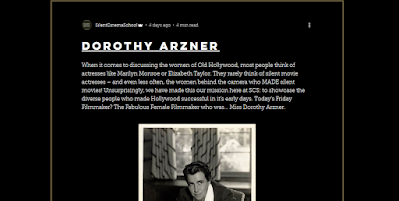 Each month, the CMBA profiles a classic movie blog and its writers. This month, we’re featuring Brittany, Kenny, Lori, and Michael of Silent Cinema School. All four write for the blog.

SILENT CINEMA SCHOOL: The qualities that make the story relatable, to both past and future generations. A film can reflect the time in which it was made, but when it has that special “something” that speaks to the hearts of the audience—that’s what makes it a classic.

SILENT CINEMA SCHOOL: “Old” movies are a window into the past—history in motion, if you will. Not only can they teach us about history, they can show us the parallels between all generations, and have the potential to bring them together.

CMBA: Do you see great distinctions between genres in silent films, and which genres do you favor?

SILENT CINEMA SCHOOL: Yes, there are definitely genre differences in silent films, just as there are today. Personally, I prefer the comedies of the Big 3 (Charlie Chaplin, Buster Keaton, and Harold Lloyd), as well as the adventure films of Douglas Fairbanks, Sr.—although he did fairly well with comedy in the early days, too!

CMBA: What classic silent films do you recommend to people who may not have seen many older films?

SILENT CINEMA SCHOOL: I typically recommend comedies from the mid-late 1920s (such as Steamboat Bill, Jr.) because many newbies to silent film are used to modern films (which moves much faster). With the streamlined comedies, there’s lots of action—and little to no “lagging” in the story, which usually causes modern audiences to lose interest. *Yes, I am always telling my friends which silent movies to watch!!

SILENT CINEMA SCHOOL: I thoroughly enjoy learning about different people who were part of Old Hollywood and particularly how so many of their lives intersect with one another. Several of us (Michael, Lori, Kenny and myself) started Silent Cinema School during the 2020 lockdown, as a way to bring our hobby of studying silent film to family and friends who were interested, but we didn’t know where to start learning more. We hope to continue bringing the history of cinema to newbies for a long time to come!
Tweet
Posted by Marianne at 4:01 AM No comments: