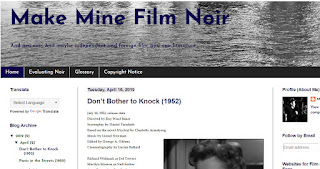 If this interview is familiar, that's because I somehow (Sticky Fingers?) deleted the original post while posting about our Spring Blogathon.  Therefore, this month I am reposting Marianne L'Abbate's Make Mine Film Noir. The interview is worth a second look especially if you are into Film Noir.

What sparked your interest in classic film?
My mother’s influence likely sparked my interest in classic film. Two of our local television stations showed a weekday afternoon movie every day of the school week, and my mother would watch them the way some people watched soaps. I soon picked up the habit, too. When I got to high school, I would get up in the middle of the night if I knew that a Gene Kelly movie would be showing in the early morning hours on television. One of the reasons that I don’t have cable is because I would do the same thing today if I had movies to watch twenty-four hours a day!

Your blog specializes in Film Noir. What attracted you to the dark world of noir?
I always say that film noir shows you what not to do. Noir provides a way to experience a situation vicariously so that you can avoid inviting it into your own life. And I guess it is a mixture of horror and fascination without any of the repercussions.

I remember seeing Hush Hush Sweet Charlotte on television on a school day afternoon. It is Bruce Dern’s first film, and his hand is chopped off in the family gazebo one night during Charlotte’s debut into genteel Southern society, during her debutante ball. I remember that scene to this day, so maybe that started my fascination with the darker side of films.

Can you tell us a few of your favorite film noirs and others?
It’s so hard to pick favorites. One film I can see again and again is The Dark Corner, with Lucille Ball and Mark Stevens. It has the right mix of pessimism and humor. And it also happens to be the first film, my first post, in my blog. Too Late for Tears, starring Lizabeth Scott and Dan Duryea, is another good one. I’m partial to it because it reminds me of those school afternoons when I was probably watching it on television instead of doing my homework. Born to Kill, starring Lawrence Tierney and Claire Trevor, is one of the best examples of a film that describes what not to do. Both Tierney and Trevor give ferocious performances in that film.

I also love most Gene Kelly musicals and Jack Lemmon movies. I still laugh when I see The Odd Couple and The Out-of-Towners.

How do you explain noir to someone unfamiliar with that cinematically stylish world and what film(s) would you recommend?
I think part of the reason that people may find film noir intimidating is that describing it as a genre is open to so much debate. As a genre or category, it has a lot of fuzzy edges, and many fans are passionate (dare I say, opinionated!) about what constitutes film noir. It is one of the reasons that I am not a huge fan of categories, although they can be helpful for discussion.

For people who want to learn about film noir, it may help to read some pulp and detective novels from the 1930s and 1940s because so many films noir are based on them. And one can always jump right in and see as many films as possible. Once you start defining film noir for yourself and have seen films that you enjoy, I think you start feeling comfortable with the genre.

For those who have never seen a film noir, I would suggest starting with detective films. People cannot go wrong with films based on those pulp and detective novels published in the 1930s and 1940s. Examples of authors of these novels are James M. Cain and Dashiell Hammett. Movies based on their work include Double Indemnity, Mildred Pierce, and The Postman Always Rings Twice, based on Cain’s work, and The Maltese Falcon, based on Hammett’s novel.

I noticed you read and review the world of noir/hard-boiled literature (David Goodis, Dorothy Hughes, James M. Cain). Which came first for you, film or books, and what authors are favorites?
My love of books came first. My mother said that I went to school in the second grade one day and came home that afternoon reading. I remember what it was like to realize that the letters on the blackboard and on the page represented something.

Dashiell Hammett is a favorite noir author. So is Dorothy Hughes, specifically her novel In a Lonely Place. The film based on it, starring Humphry Bogart and Gloria Grahame, is very different from the book, and both are excellent. Steve Fisher wrote the book I Wake up Screaming, on which the film starring Victor Mature and Betty Grable is based; both the book and the film are favorites of mine. Fisher has many film and book credits, but he is probably the least known of the writers I mention here.

What other film genre(s) do you favor?
Romantic comedies. They seem like the exact opposite genre compared to film noir, and maybe that’s why I enjoy them. A romantic comedy that’s offbeat enough to have some “noir-ish tendencies” is Lars and the Real Girl. I am a big fan of the Bridget Jones movies. I hope a fourth one is in the works.

What film(s) considered a classic do you absolutely hate?
This is the toughest question, even tougher than picking favorite films and authors. But I have to confess that I have never really liked Out of the Past, starring Robert Mitchum and Jane Greer. It is considered a quintessential film noir, maybe the quintessential film noir, but I have never liked the ending. In general, though, I like films so much that I can almost always find something good in a film, even Out of the Past; after all, Robert Mitchum is worth watching in that film. . . . I may have to get back to you on this question.

What is the most rewarding thing for you about blogging?
Blogging about film is a way to delve into films a little more deeply, to enjoy them a little bit more. When I write about a film that I think I don’t like all that much, I find myself liking it, sometimes quite a bit, by the time I am finished writing about it. I like working with language. I can’t think of a better way to spend my time than writing about a topic I enjoy as much as film. What’s not to like! Hearing from other film fans who are inspired to see a film after reading one of my posts is always satisfying, too.

Thank you, by the way, for giving me this chance to talk about classic film and film noir.


Tweet
Posted by Classic Movie Blog Association at 8:09 AM No comments: