The CMBA salutes all of this year's winners, who represent the highest quality in classic movie blogging on the web. Please extend your congratulations to them by leaving a comment below or, better yet, visiting their blog sites.
Tweet
Posted by Rick29 at 5:24 AM 11 comments:

Movie Review: The Gunfighter, The Girl with the White Parasol, http://www.thegirlwiththewhiteparasol.blogspot.com/2012/01/movie-review-gunfighter.html

It’s Not Just a Job, It’s an Adventure: My Low-Budget Film Gig, Tales of the Easily Distracted, http://doriantb.blogspot.com/2011/09/its-not-just-job-its-adventure-my-low.html

A Tale of Two Epics: I, Claudius, The Lady Eve’s Reel Life, http://eves-reel-life.blogspot.com/2012/04/i-claudius-epic-tales.html

A Month of Vertigo, The Lady Eve’s Reel Life, http://eves-reel-life.blogspot.com/p/a-month-of-vertigo-bloggers-their-posts.html

Summer Under the Stars Blogathon, Sittin' On a Backyard Fence,  http://sittinonabackyardfence.com/2012/07/30/let-the-games-begin/

How many times have you watched a movie that was clearly saluting the man known as “The Master of Suspense”? Filmmakers from Brian DePalma to D.J. Caruso and so many more have aimed for a Hitchcockian feel in their thrillers—and some of them actually did an amazingly good job of bowing to The Master! So this summer, from July 7th through July 12th, Tales of the Easily Distracted and ClassicBecky’s Brain Food are celebrating filmmakers who love Hitchcock. The idea is to not review Alfred's own films, but those that have a Hitchcockian feeling and Hitchcockian elements in them.  For example, North by Northwest shares a lot of themes with The Prize (1963), Psycho surely inspired DePalma's Dressed to Kill (1980) not to mention more than a couple more. A film doesn't have to be based on or inspired by any particular AH film, either: Charade (1963) and Arabesque (1966) certainly have the freewheeling terror that a great Hitchcock film does.  For more information, click here.
Tweet
Posted by Classic Movie Blog Association at 11:36 PM 2 comments: 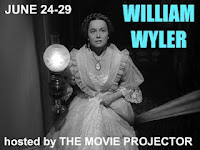 The Movie Projector is hosting a blogathon June 24-29, 2012, honoring William Wyler, one of the great directors of Hollywood's studio era. Twenty-five bloggers, many of them members of the Classic Movie Blog Association, will be writing on the major films of Wyler's forty-five year long career. For details and a complete schedule of the blogathon, click here to visit the William Wyler Blogathon page at The Movie Projector.
Tweet

The second annual Queer Film Blogathon, hosted by Garbo Laughs, will be held June 18-22, 2012. It will celebrate lesbian, gay, bisexual, trans, or otherwise non-heterosexual, non-gender-binary depictions or personages in film. It's open all film bloggers regardless of era or area of focus. For more info, click here to view details at Garbo Laughs.
Tweet
Posted by Rick29 at 5:07 PM No comments:

The First Ever Horseathon is Here!

The Horseathon, hosted by Page at My Love of Old Hollywood will run from May 25-28. If  you haven't signed up for it, would like more details about it just click here. The deadline for signing up is May 10th.
We hope to see you there!
Page 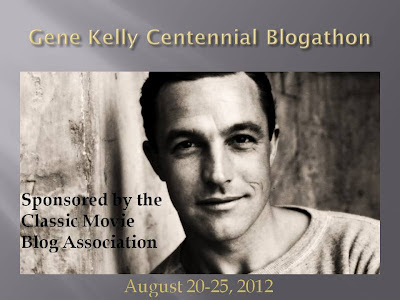 The Classic Movie Blog Association will host a Gene Kelly Centennial Blogathon in honor of the actor, director, and choreographer's 100th birthday the week of August 20-25. If you are a CMBA blog and would like to participate, but haven't signed up yet, contact me at wilsonkjm@yahoo.com to do so. Here are the CMBA blogs scheduled to participate:

Aug. 24
Silver Screen Modiste: An American in Paris (1951)
A Person in the Dark: Marjorie Morningstar (1958)
True Classics: Take Me Out to the Ball Game (1949)
Thrilling Days of Yesteryear: Christmas Holiday (1944)
Classicfilmboy's Movie Paradise: Invitation to Dance (1956)

A Powell and Pressberger Blogathon! 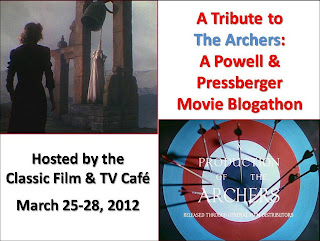 The Classic Film & TV Cafe is hosting a March 25-28 blogathon featuring the stellar films of Michael Powell and Emeric Pressberger (known collectively as The Archers). For a list of all participating bloggers and links to their posts, click here.
Tweet
Posted by Rick29 at 12:04 AM No comments: 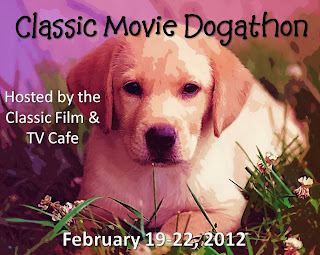 The world's first Classic Movie Dogathon (well, we think it is) ran over four days in February 2012. Hosted by the Classic Film & TV Cafe, it featured 24 posts consisting of a review of a classic film featuring a dog in a prominent role or a profile of a famous canine performer. Whether you're a dog lover or a movie lover, we recommend that you check out the classics below!  (Just click on the blog title)

After the Thin Man - Tales of the Easily Distracted

A Boy and His Dog - Old Horror Movies

Digby, the Biggest Dog in the World - The Forty Year-Old Fanboy

Bringing Up Baby - My Love of Old Hollywood

The Jerk - Sittin' on a Backyard Fence

Lady and the Tramp - Noir and Chick Flicks

The Awful Truth - Once upon a screen...

The Wizard of Oz - Silver Screenings

The Hound of the Baskervilles (1939) - ClassicBecky's Brain Food

Since You Went Away - Comet Over Hollywood

The Proud Rebel - The Shades of Black and White