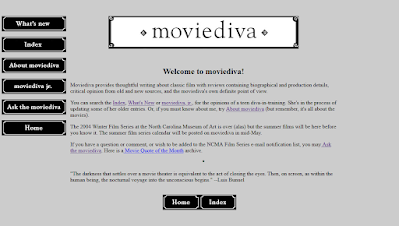 Each month, the CMBA profiles a classic movie blog. This month, we’re featuring Laura Boyes of the Movie Diva blog.

MOVIE DIVA: A classic film is one that you can watch over and over, and still find something engaging, compelling, or sometimes revealing in a new way that you have not experienced in previous viewings.

MOVIE DIVA: Old movies are invaluable cultural history which give pleasure in surprising and gratifying ways if you open your mind to older styles of filmmaking.

MOVIE DIVA: When I introduced my daughter to classic films many years ago, I started with short comedies by Buster Keaton, Charlie Chaplin, and Harold Lloyd.  She also really loved both A Hard Day’s Night and Help! when she was in second grade or so.  We expanded our viewing to encompass an eclectic list of old movies, and she has retained her love for classic cinema (she’s thirty-two now).

MOVIE DIVA: I started blogging as an accompaniment to the films I was introducing at the North Carolina Museum of Art in Raleigh, North Carolina.  I wanted to give the films some cultural context and basically just try to get everyone as excited about cinema history as I was.  Over the twenty years that I introduced films there, I had many people say that they came as much for the introductions as for the films, although I still feel the big screen and the theater experience is valuable. Now, I have a more modest film series at the Carolina Theatre of Durham, North Carolina, and it gives me inspiration to keep watching and discovering more films that both give enjoyment and speak to modern audiences.
Tweet
Posted by Marianne at 12:35 AM No comments: