CMBA Blog Profile: The Man on the Flying Trapeze 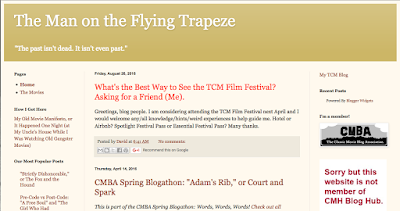 The CMBA profiles two classic movie blogs per month, on the 1st and the 15th of the month. Today we're featuring David from The Man on the FlyingTrapeze.

If you remember the Spike Jones version of the song “The Man on the Flying Trapeze”, you’ll recall the mixture of admiration and humour in the lyrics. The song is kind of a reluctant love letter to a venerated trapeze artist who has stolen the songwriter’s girlfriend.

The blog, The Man on the Flying Trapeze, is an unabashed love letter to classic Hollywood film. David writes with admiration and wit about the films from the Golden Age, especially pre-code films. These he's chronicled in his "Pre-Code vs Post-Code" series.

“I love pre-code movies,” says David, “and I love to dig into how they were ‘cleaned up’ (and usually made worse) to meet a set of silly standards.”

One example compares Grand Hotel to Week-End at the Waldorf. You can read this post HERE. 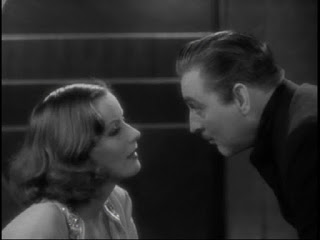 CMBA: What sparked your interest in classic film?
The Man on the Flying Trapeze: When I was a kid, my cousins lived across the street and I was over there a lot. My uncle was a fan of Warner Brothers gangster movies, and in those days (late 1960s) a local TV station showed them every night at 6:00. So instead of playing with my cousins I’d find myself in front of the TV watching people shoot at each other with tommy guns in black and white, and to this day the experience remains magical to me. (Those Warner gunshots have a sound all their own!)

CMBA: What makes a film a "classic" in your opinion?
The Man on the Flying Trapeze: A great script, classic dialogue, terrific performances, striking photography or an intangible something that captures the zeitgeist of the moment and yet still seems timeless. 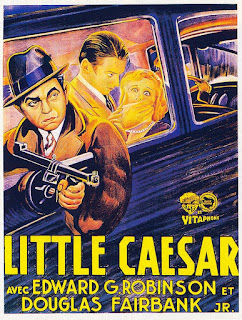 CMBA: What classic film(s) do you recommend to people who say they hate old movies?
The Man on the Flying Trapeze: I don't know if it's his cynical outlook or his contemporary storytelling style, but I've had good luck introducing people to Billy Wilder movies – Sunset Boulevard, Some Like It Hot, The Apartment and Double Indemnity.

CMBA: Why should people care about classic film?
The Man on the Flying Trapeze: Because it helps explain us as a people and it demonstrates where our storytelling traditions come from. As a culture we are too fascinated with newness for its own sake. New automatically equals cool/good. That people can be reluctant to look at anything considered "old" makes no more sense to me than someone refusing to look at something just because it's blue. 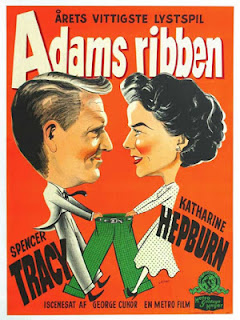 CMBA: What is the most rewarding thing about blogging?
The Man on the Flying Trapeze: The illusion that everyone is paying attention to what you post – and the feedback that you get from a dedicated handful of people with the same obsessions as yours.

CMBA: What challenges do you face with your blog, and how do you overcome them?
The Man on the Flying Trapeze: I don't know why, but I always have a hard time figuring out what movie I'm going to write about next – sometimes to the degree that I just freeze up and don't write anything. I know this sounds weird, but I honestly think I'd be better off if there was someone standing over my shoulder telling me what movie to write about next. 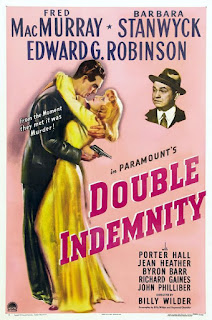 CMBA: What advice would you give to a new blogger?
The Man on the Flying Trapeze: Don't knock yourself out at first – this is a marathon, not a sprint. Try to post regularly, but not obsessively. And don’t beat yourself up if a few weeks go by between posts. 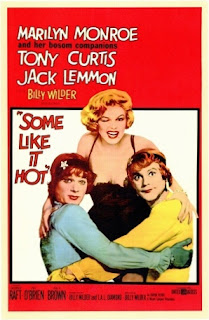