Silentology is a personal favorite of our blogs. Lea takes a fun and fresh approach to movies that a lot of people – even classic movie fans – think are old and dull, or hard to follow. It’s refreshing to see someone so young who is interested in movies that are so old. But, somehow, it makes perfect sense. Lea’s enthusiasm for early film springs from her own sense of wonder at new experiences and reminds us that what is truly classic is timeless and speaks to all generations. Her playfulness can be seen right now in the “Halloween” banner at the top of Silentology, where a red-eyed and fanged Buster Keaton examines a reel of film. The seriousness with which she takes historical research can be verified in her article on the “Big Four” of comedy, in which she examines a thorny question among silent movie fans.

Lea says “My post In Defense of the Big Four of Silent Comedy is a good example of what I try to do with Silent-ology--be informative, be interesting to read, share detailed knowledge of silent films AND offer some fresh perspectives. Hope you enjoy!”

CMBA: What sparked your interest in classic film?
Silentology: Well, I grew up with tons of classic films-- ones made from the '30s through the '60s, that is. Rogers and Hammerstein musicals, Alfred Hitchcock, Laurel and Hardy, classic Disney, film noir, screwball comedies--everything. My mom loved old movies, so I watched hardly anything else. My particular obsession with silents, however, didn't start until a few years ago when I started watching them on YouTube for fun. Once I stumbled upon the work on Buster Keaton, I was officially sold. In a way, silents were my perfect match. Not only was I already very comfortable with older movies, but ever since I was little I had always been interested in things that were obscure. Obscure names, obscure old books, obscure countries on the map, you name it. Georges Melies said that when he first encountered moving pictures in the 1890s he immediately thought, "This is for me!" That's exactly how I feel about the silent era--"This is for me!" 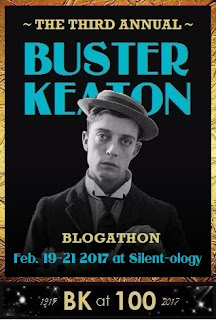 CMBA: What makes a film a "classic" in your opinion?
Silentology: It's a well-made, well-paced film that's stood the test of time, and can still entertain or move people today. Being "dated" isn't always a flaw, necessarily. It just has to "work." Being a good example of skilled filmmaking is usually a must, although there are exceptions for some low-budget films that still make an impact on people.

CMBA: What classic film(s) do you recommend to people who say they hate old movies?
Silentology: For one thing, if someone says they hate old movies I usually assume they haven't watched one! Or at least, that they happened to be introduced to one that absolutely didn't appeal to their interests. Since my niche isn't just old films, but really old films, the biggest challenge is to prove to people that movies from their great-grandfather's day were often just as entertaining and well made as the ones made decades later. Buster Keaton shorts always do the trick for me--they're fresh, very funny, briskly paced, and everyone has always been impressed by them. Once they've gotten a taste of how good silents can be, I'll follow up with whichever film I feel will pique their interest. For some it might be a short drama, for others maybe a flapper flick. Usually, mentioning how fascinating it is to actually see history, rather than just read about it, is enough to make people feel curious. (It helps when you're enthusiastic, too!) 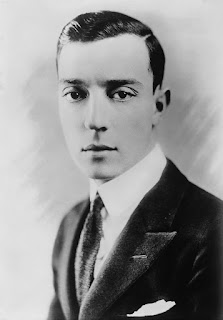 CMBA: Why should people care about classic film?
Silentology: Oh my, let me count the ways. For one thing, appreciating classic film is no different from appreciating art or literature. And it's incredibly important, because it's influenced the way we think and feel about countless subjects, such as history, romance, issues of the day, and so on. Plus, with film, we have the rare ability to study an art form from its clear-cut beginnings. I'll add that it's also a window into history unlike anything else--a chance to go back into time, in a sense.

CMBA: What is the most rewarding thing about blogging?
Silentology: It's the gift that keeps on giving! The biggest thrill is getting feedback from readers who appreciate my posts. And I can confirm that it can lead to so many wonderful things. My blog's led me to attending film festivals, conventions, and special movie screenings I wouldn't have heard of otherwise. I've visited Hollywood (twice!), met wonderful new friends, and even met some relatives of old Hollywood stars. Little did I know when I started Silent-ology, that it would truly change my life. So I say, if you have an inkling that you'd like to start a blog--do it!

CMBA: What challenges do you face with your blog, and how do you overcome them?
Silentology: While I usually can find time to write, I have jobs that tend to be physically tiring, and at the end of a long day it can be tough to sit down and try to gather my thoughts together. And, of course, I can procrastinate as much as the next person. Sometimes it helps to make yourself write steadily for half an hour, take a ten minute break and go do something else, then sit down and write for another half an hour. And ultimately, there are times when you have to get tough with yourself and decide that when you sit down to write, you have to do it, no ifs, ands, or buts!

CMBA: What advice would you give to a new blogger?
Silentology: Other than "go for it!" I say to do two things. First, get to know people in the film community--if anything, find some fun Facebook groups to join.  I was in various silent-related groups for years before even thinking about being a blogger, and as it turned out, knowing fellow fans helped me find an audience much quicker. Second, write a bunch of posts before you make your blog "go live." Then you'll get some practice and see if it's to your liking, and you'll also have a stash of material ready to go. 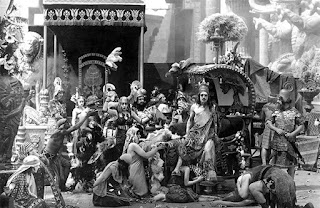 Thank you for joining us, Lea! You can visit Silentology HERE.
https://silentology.wordpress.com/
Tweet