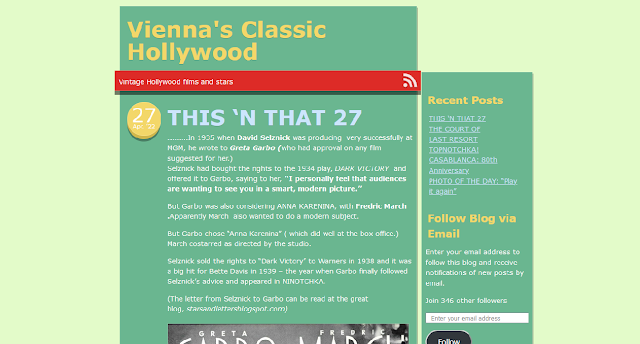 Each month, the CMBA profiles a member and their classic movie blog. This month, we’re featuring Vienna, who writes at Vienna’s ClassicHollywood.

Vienna: I’d say “classic” could apply to any era. We love vintage Hollywood, which can range from the silents to the 1970s. For me it’s the 1930s, 1940s, and 1950s. It’s all so personal. I think all my film favorites are classics!  I’m not sure you can define a classic. There are many black-and-white films I wish had been made in color—westerns, musicals, comedies—but so many of the movies we love were made before color film became the norm.

Vienna: My favorite genres are probably thrillers (ideal for black and white) and 1950s westerns. My favorite studio is probably RKO just because they made so many of my favorites.

Vienna: I’ve been blogging for nearly ten years and two things stand out. I love the research and the fact that I am still finding out new things about stars or films. I love sharing thoughts and opinions with fellow fans. I’ve got a bad habit of starting lots of posts and then taking ages to finish them. I can’t admit how many I have on the go at the moment. To give you a clue, they include JUNE HAVOC, CRAIG’S WIFE, ANDREA KING, NINA FOCH, COME NEXT SPRING, HELEN GAHAGAN DOUGLAS, VILLAIN TO HERO, GRACE MOORE. And many more!

CMBA: Is there a classic film that you find yourself watching again and again?

Vienna: Maybe it’s not a classic, but a small film in my top 50 that I’ve watched many times is ARMORED CAR ROBBERY starring Charles McGraw. I also love Randolph Scott westerns, especially SEVEN MEN FROM NOW and HANGMAN’S KNOT.
Tweet